(ONTARIO, CANADA) The Federation of International Lacrosse (FIL) has awarded the 2020 U19 Men’s World Lacrosse Championship to Ireland Lacrosse. The event will take place July 9-18, 2020 at the University of Limerick in Castletroy, Limerick, Ireland. 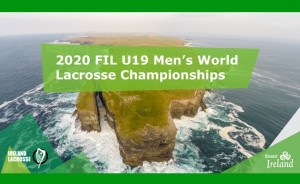 Federation of International Lacrosse President, Stan Cockerton, was pleased to make the announcement. “On behalf of the Federation of International Lacrosse board and our 54 member nations, may I congratulate Ireland Lacrosse on their successful bid to host the 2020 FIL Men’s U19 World Championship at the University of Limerick, Limerick, Ireland.” Cockerton added, “We are confident that Ireland Lacrosse will host an event that everyone will be proud of and an event that will that help generate further growth and development of our sport in Ireland and throughout Europe.”

The 2020 FIL Men’s U19 World Championship will be the first lacrosse world championship hosted by Ireland and it promises to be unforgettable. The University of Limerick is known as Ireland’s “Sporting Campus.” All amenities and accommodations are in one convenient location with no transportation required during the championship.

Terry Harding, Director of Men’s Lacrosse for FIL, shared his enthusiasm about the announcement, “FIL is very excited that Ireland Lacrosse will be hosting it’s first ever lacrosse world championship. The University of Limerick is a spectacular venue for the event, and we are expecting to see a record number of countries participating. Congratulations to Ireland Lacrosse.”

Michael Kennedy, Chief Executive Officer of Ireland Lacrosse and chair of the organizing committee had this to say about the decision, “We at Ireland Lacrosse are thrilled with FIL’s decision. This effort was the result of an active partnership between Ireland Lacrosse, the University of Limerick, Failte Ireland (the National Tourism Development Authority) and Abbey Events, a leading professional event organizer and travel agency and frequent partner of Failte Ireland. We also received support from the Irish Government’s Department of Transport, Tourism and Sport.”

Lacrosse has a unique and rich history in Ireland, dating back to the establishment of the first club team in 1872 in Newtownards, just outside Belfast. At its height in the late 1800s, there were over a dozen men’s lacrosse teams throughout Ireland and the sport was played in many schools during that time. Interest waned until 2001 when the men’s national team participated in the European Championships in Penarth, Wales. In 2005, an Irish women’s team was formed to take part in the ELF European Newcomer’s Tournament in Copenhagen, Denmark, which it won. Since then, the Irish lacrosse program has grown steadily, competing in every major international tournament that has taken place since the re-emergence of the men’s and women’s senior national teams. In 2007, a men’s indoor team was created, and in 2016, the Irish U19 men’s team will make its debut in the 2016 World U19 Championships in Canada. Plans are also underway for the U19 women’s team to make its debut at the 2019 World U19 Championships.

Kennedy believes Ireland will be the perfect location to showcase the sport. “It is our hope that by holding the event here in Ireland, the profile of the sport will be elevated, attracting new players, and open up sponsorship and funding – not just for Ireland Lacrosse – but for other new lacrosse developing nations that are beginning to promote the game at youth level.” Kennedy concluded, “Hosting the 2020 FIL U19 Men’s World Lacrosse Championship allows us to match the sport that we all love with the passion for all sports in Ireland. It also makes it possible to showcase the outstanding facilities available at the University of Limerick and our nation’s fame as a top tourist destination and the ‘land of a hundred thousand welcomes’.” 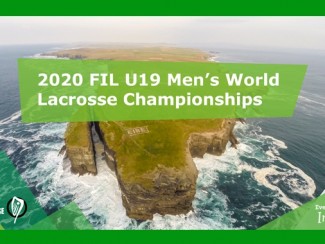