DUBLIN, IRELAND – Ireland Lacrosse has announced an 18-player roster for the Women’s National team, which is set to compete in the 2017 FIL Women’s World Cup. The World Cup is to be held at the University of Surrey, in Guilford, Surrey, England from 12-22 July. These players were selected after an intensive, three-day selection camp in Dublin.

“This was the most competitive selection camp in the Irish Women’s National Team history,  both in sheer number of participants and in depth of talent and athleticism. It shows the growth of the sport and the positive direction for the future women’s programme. The return of the same coaching staff also highlights a significant step for the women’s team, and I am thrilled to coach alongside such decorated, knowledgable, and committed coaches,” said Head Coach Sarah Walsh. She continued, “The 18 players selected bring a combination of experience, leadership, talent, and energy to the team. The eleven returners have a wealth of international experience, passion, and poise that compliment the seven newcomers’ intensity, enthusiasm, and desire to compete at the highest level. This group as a whole is the most balanced team that we have ever put on the field. I am confident in our selection and excited to see what we can accomplish together.” 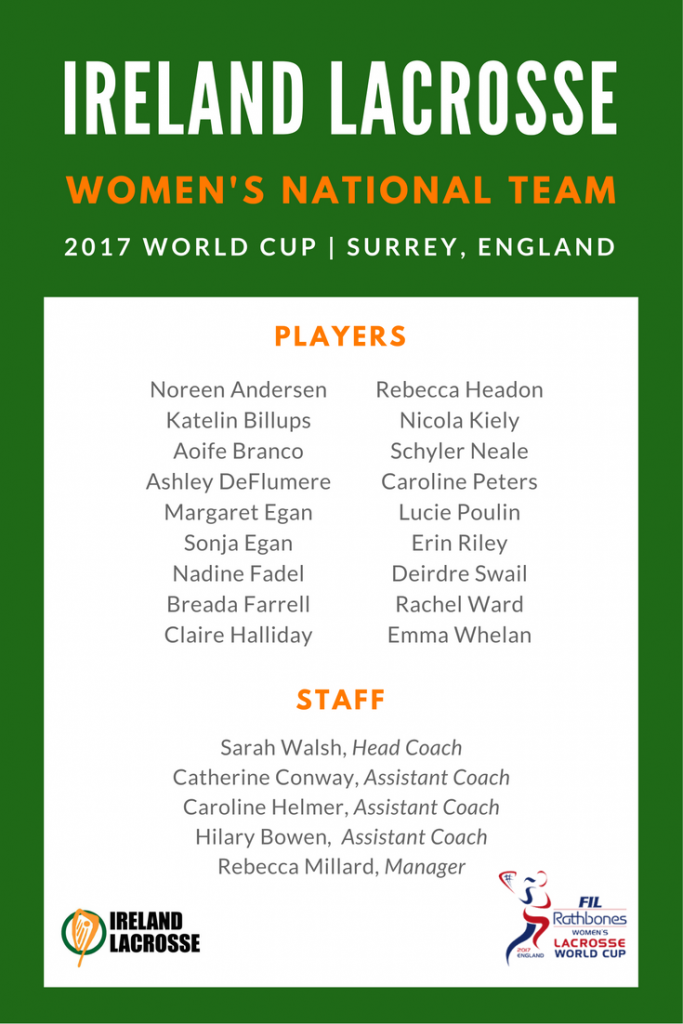 Ireland returns 11 players, comprised of veterans of the 2009 & 2013 World Cup, and 2012 & 2015 European Championship teams. This will be the first international tournament for seven players; the most newcomers since the 2009 World Cup.  The Girls in Green look to improve on their 10th place finish at the 2013 World Cup. Teams representing 28 nations are expected to participate in the 2017 World Cup, up from 19 in 2013. Further information about the tournament, including ticket sales, can be found here (click).

A strong showing by the Irish Women’s team on the field will continue to firm the foundation to expand the domestic Irish programme.  Help this great group of women accomplish their on-field goals with a financial contribution. Donations originating in the USA are tax-deductible. Click here to contribute. If you are interested in sponsoring a player, doing a corporate matching donation, or have another way to support the wonderful women of Ireland Lacrosse, please email Head Coach Sarah Walsh swalsh@irelandlacrosse.ie.