Four captains were selected for the 2019 Women’s Under 19 National team, the first team to ever take the field at this age for Ireland. The four women selected by their peers and coaches are Eimear Fitzpatrick, Orla Buggy, Georgia Scott, and Katie McCarthy. 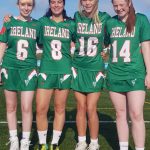 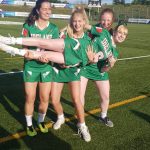 Please see a brief bio on each, below.

Plays for: Dublin Lacrosse
Been playing for: 2 years
From: Dublin, Ireland
Irish is Eimear’s predominantly spoken language, her parents and extended family are all from Inis Mór in the Aran Islands. Eimear thanks her family for their support and patience while she follows her passion. She would also like to say a huge thank you to Manager Laura Stokes and Coach Aisling Casey (& the rest of the Dublin Lacrosse Club Team) for the support, belief, confidence and love they’ve given her. Eimear has nothing put pride for her country and is excited to show the world what it truly means to be Irish.
Orla Buggy
Plays for: Loreto College and Dublin Lacrosse
Been Playing for: 1 1/2 years
From: Dublin, Ireland
Orla, known as Buggy to her teammates, grew up playing traditional Irish sports such as Gaelic football and Camoige. She supports her teammates with her famous positive attitude and spirit. Orla’s school team, Loreto, won the inaugural schools cup this year with the help of Orla’s leadership at defense. She is so proud of Ireland for joining the global arena of lacrosse, and her motto for the tournament is “Go big or go home!” Orla always has a smile on her face and is honored to be representing her country.
Georgia Scott
Plays for: Pitzer College
Been playing for: 10 Years
From: Northern California
This week Georgia will be playing for her grandmother, Pauline, who was her strongest, most enthusiastic connection to Ireland and sadly passed away earlier this year. She’d like to thank her entire family for their love and friendship, especially her sister Isabella who has made many sacrifices to support Georgia’s lacrosse career. More than anything, Georgia is thrilled and honored to be a part of the most enthusiastic, loving, and fun team in the world. Her infectious determination and leadership inspires everyone on the team to achieve their maximum potential.
Katie McCarthy
Play for: Oxford University
Been player for: 8 Years
From: Buckinghamshire
Katie’s four grandparents embodied the true Irish spirit, this tournament Katie will be following their example, giving everything she can to represent the most inspiring, loving and supportive team there is. She would like to thank all of her family for their unwavering support, and the family she has found within u19 Irish women’s lacrosse, which has truly been a better family thank she could have asked for. Katie’s humor and love for each player has united the team and created a strong culture of energy and effort. 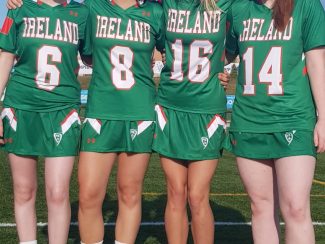 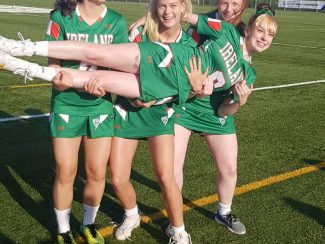