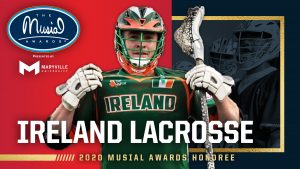 The Musial Awards – presented by Maryville University – celebrate the greatest moments of sportsmanship and those in sports who embody class and character.

The first Musial Award recipient from outside North America, Ireland Lacrosse is being honored for an amazing gesture of selflessness and sacrifice. The Haudenosaunee (hoa-duh-no-SHAWN-ee), known to many as the Iroquois Confederacy, have shared with the world the sport of lacrosse, which they believe was given to them by the Creator as a vehicle for peace, friendship and healing. To this day, the Haudenosaunee compete as the Iroquois Nationals and are revered for founding the sport as well as their level of play, consistently ranking in the top three in the world. So, when the Iroquois Nationals were excluded from the eight-team field in the 2022 World Games because of sovereignty issues, lacrosse lovers took a stand. Among them was Ireland Lacrosse, the lowest-ranked team invited to the World Games. Ireland volunteered to relinquish its spot in the games, a stepping stone to inclusion in the Olympics, after assurances that the Iroquois Nationals would be invited.

“As much as our players would have been honored, we know the right thing is for the Iroquois Nationals to represent our sport on this international stage,” said Michael Kennedy, chief executive officer of Ireland Lacrosse.

Altogether, the Musial Awards Class of 2020 is a beacon of kindness, selflessness, decency and civility in a time when those attributes are so needed. Due to the global pandemic, this year’s honorees could not be recognized in person at the Musial Awards, which normally takes place the Saturday before Thanksgiving at Stifel Theatre in St. Louis. The Musial Awards will air on CBS on Saturday Dec. 26 at 3 p.m. ET / 2 p.m. CT 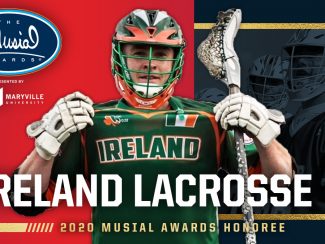