The Women’s Senior National team came away from their last Pool A game with a 11-8 victory over Germany. The Girls in Green head to the quarterfinals for a match up with Czechia.

A tepid start did not deter the Women’s Senior National Team in their last game of pool play vs Germany. After winning the initial draw but failing to score on the possession, the German attack set to work, netting 2 goals. Clio Kerr broke the scoring drought prior to the break, off a feed from Maggie Egan. Nonie Andersen connected with Robyn Morris for another tally, and Caroline Peters got to net on a free position. At halftime, the score was knotted 3-3.

The Germans resolutely controlled the third quarter, winning the battle at the draw circle and on the ground for loose balls. Nonie Andersen had her hand in both Irish goals of the quarter, assisting Maggie Egan and Clio Kerr. The Green Machine trailed 5-7 going into the last quarter, but this did not seem to faze anyone on the team. 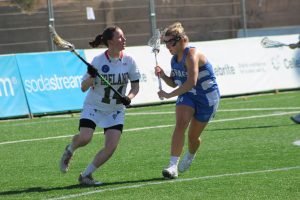 The Irish erupted for 6 unanswered goals on 7 shots, 10 ground balls, and zero turnovers. Kerry Ullman hit Clio Kerr for her third goal of the day. Caroline Peters converted on another free position. Nonie Andersen showcased her ability to change speed with what can only be called a “speed” or “bull” dodge from up top, scoring to put the Irish ahead for the first time all game (8-7). Caroline Peters struck net again, before assisting Erin Riley for another tally. Riley hit cage again, to close out the Irish scoring at 11-7.

Goalie Delaney Friel had a solid game, making 8 saves on 15 shots on cage. She was 100% for clears. Becky Moloney stepped in to close out the game, making one save, controlling a loose ball, and clearing it effectively. Defensively Ameila Heisler, Lucie Poulin, Dee McKim, Noreen Cassidy and Maggie Egan did an excellent job of neutralizing the long German offensive stands.

Assistant Coach Hilary O’Dougherty  “This game presented a challenge as we faced a defense that we had not yet seen. The first two quarters were not our most successful of the tournament, but the team did a good job of implementing changes as necessary once we started to work as a unit, rather than individuals.”

The Irish will now face the top seed of Pool C, the Czech Republic, on Monday 22 July 2019. Czechia has not faced much, if any, competition to this point, playing the lowest end of teams at the tournament (Spain, Sweden, Finland). Austria gave them their closest match, winning 18-8.

Head Coach Cacki Helmer  “The level of competition in our pool play has prepared us well for this playoff run. We have improved in every area of our play since the tournament began. The grind of five straight game days was tough, but the restday was well spent and we are ready to perform. We look forward to a re-match with the Czechs, after a disappointing loss to them in the 2017 World Championship 6-9.”

For in-game updates to all matches along with behind the scenes action check out (via Twitter) @IrelandWLax. And in a very exciting turn – all of the Ireland games were chosen to also be broadcast on the Olympic Channel – click here to access! 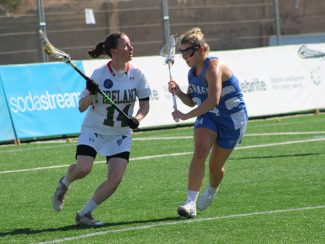 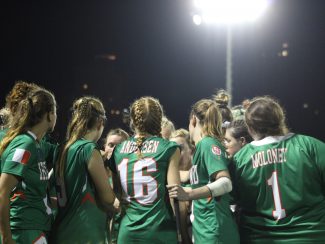