DUBLIN, IRELAND – Ireland Lacrosse has announced a 18-player roster for the Women’s Under 19 National Team, which is set to compete in the FIL U19 World Championship, in Peterborough, Ontario from 1-10 August 2019. This will the first-ever Irish women’s under-19 team to compete in an international lacrosse competition. 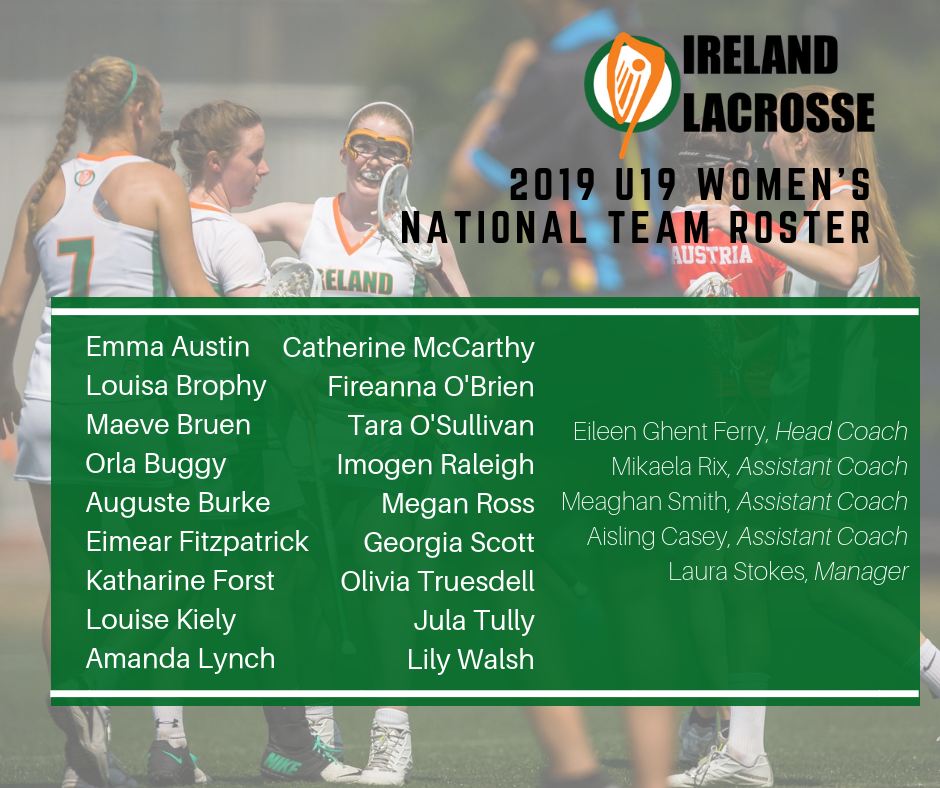 The team is lead by Head Coach Eileen Ghent Ferry. She is assisted by Mikaela Rix, Meghan Smith and Aisling Casey. Laura Stokes serves as the Team Manager. Eileen Ferry and Meghan Smith have strong backgrounds in NCAA lacrosse. Ferry is the Head Coach at Ursuline College, with prior experience at Robert Morris University, Monmouth University and Rutgers University. Smith is the Head Coach at St. Anselm College, with prior experience at the College of the Holy Cross. Mikaela Rix, a graduate of Boston College, was a member of United States U19 team in 2011, when the US last took home gold from Peterborough. Aisling Casey is an alumna of Ireland’s senior women’s National Team, with 8 caps in the 2012 European Championships; she serves as the Head Coach at University College Dublin.

Head Coach Eileen Ghent Ferry “I am thrilled to be a part of the first ever Ireland U19 women’s team.  We have selected 18 talented individuals that represent the future of lacrosse in this country.  I’m excited to have them back together again in August to compete at the highest level as Team Ireland!”

As a player-funded organization, each rostered player is responsible cover their respective costs to be on the team. These costs include: transportation, food, accommodation, uniforms, equipment and a whole host of other costs.  Your donation will make it possible for numerous players to be able to participate in the 2019 U19 World Championship. Donations originating in the USA are tax-deductible. Click here to donate!