DUBLIN, IRELAND – Ireland Lacrosse has announced its roster for the Women’s Senior National Team, which is set to compete in the ELF European Championship, in Netanya, Israel from 16-25 July 2019.  The Ireland team enters the tournament ranked 5th in Europe. The Green Machine will compete in the Blue Division against other women’s lacrosse powerhouses including England, Wales, Scotland, Israel and Germany.

Cacki Helmer has taken the reins as Head Coach, and will lead the team in her 3rd tournament on staff. Hilary Bowen O’Dougherty and Catherine Conway also return for their 3rd international tournament. Alyson Neagle returns as Athletic Trainer/Physio after a superb performance at the 2017 World Cup.

Coach Helmer “Our 2019 European Championships team will feature several key veteran players, as well as some fresh faces to the National Team. The promise of our program’s potential rises each year, and with new players working their way onto our Senior National Team, we are reminded of the rewards of hard work and the growth of the game of lacrosse. Much of the growth of our game in Ireland is due to the passion and motivation of our senior players. It is with this drive and determination to spread lacrosse throughout Ireland that we have high hopes as a coaching staff for a successful 2019 European Championship run.” 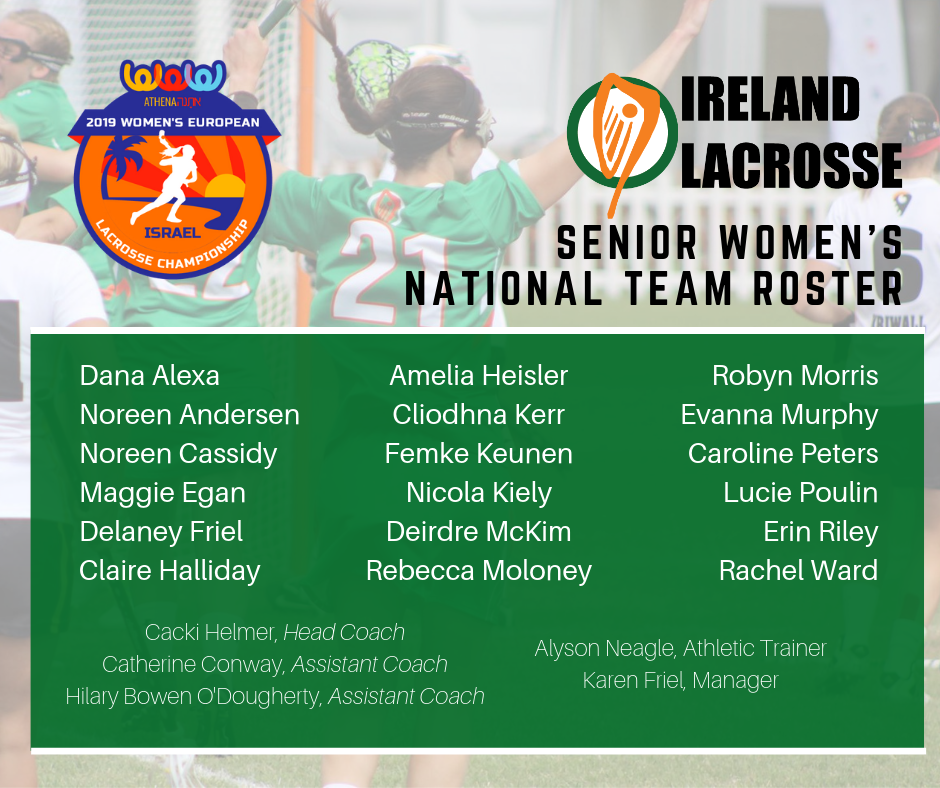 As a player-funded organization, each rostered player is responsible cover their respective costs to be on the team. These costs include: transportation, food, accommodation, uniforms, equipment and a whole host of other costs.  Your donation will make it possible for numerous players to be able to participate in the 2019 European Championships. Donations originating in the USA are tax-deductible.  Click here to donate!