11 November 2019, Dublin, Ireland – Ireland Lacrosse today is proud to announce the 2020 Ireland Men’s U19 National Lacrosse Team.  The team will represent Ireland as the host nation at the World Lacrosse Men’s U19 World Championship being held at the University of Limerick, Limerick, Ireland 9-18 July 2020 (www.2020worldlax.com).

UPDATE April 2020 – due to COVID19, the Men’s Championship has been postponed to 20201. Ireland Lacrosse plans to keep the same roster intact for the 2021 event. If you have questions, please reach out to info@irelandlacrosse.ie. 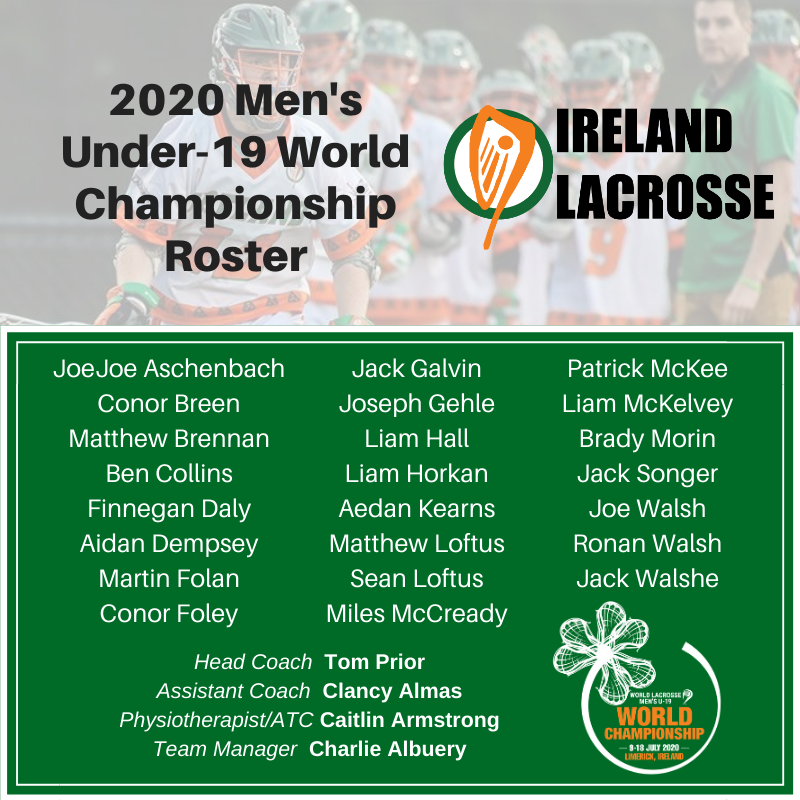 This will be Ireland’s second appearance in a Men’s U19 World Championship. Ireland, coached by Tom Prior, finished in 7th place at the 2016 World Lacrosse Men’s U19 Championship held in Coquitlam, British Columbia, Canada.  Prior returns as Head Coach, and will be assisted by Clancy Almas, who has assisted the Irish programme on the sidelines of the Men’s Indoor Team and U20 National team.

Coach Prior commented, ”Congratulations to all of our players, staff, and families for being selected as a member of Team Ireland for the U19 World Championships hosted at the University of Limerick in July, 2020.  We are very enthusiastic as we are the host country for this tournament and we take great pride in this opportunity.”

The team returns seven players from the inaugural Irish U20 Men’s National Team which finished 4th in the European U20 Championship held in Prague, Czech Republic in July 2019.

As a player-funded organisation, each rostered player is responsible for covering their respective costs to be on the team. These costs include: transportation, food, accommodation, uniforms, equipment and a whole host of other costs.  Your donation will make it possible for numerous players to be able to participate in the 2020 World Championship. Donations originating in the USA are tax-deductible. Click here to donate!